The Great Shadow of Ruthmarna

Outside the city of Drache lies a number of cities, towns and provinces of varying size and populace. Most of the people living outside Drache are natives who speak Arangothian and observe the native customs and rituals. Click here for a list Arangoth's locales, and here to view a map.
Post Reply
1 post • Page 1 of 1

The Great Shadow of Ruthmarna 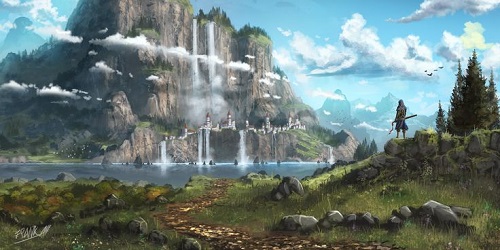 The Great Shadow of Ruthmarna spent months subjugating the dwarves of Ruthmarna, one by one, until they had all succumbed to his will. The Cult of the Umbra, fanatical shadow elves from his home plane, began to arrive in droves, deep within the mountain, brought there by the Great Shadow's magic. His great, black claw stretched outward, bit by bit, until it curled about the province's capital, Lurintheti Netri.

Lurintheti Netri was the capital of the Arangothian province of Ruthmarna. With a significant population and a strong workforce, it traded frequently with the dwarves and subsequently became one of the major providers of gold for the Arangothian Crownlands. Everything had changed months ago when rumors began to spread of a great evil in the heart of the mountain. The usual flood of gold into the Crown's coffers had slowed. First to a trickle, and then it had stopped entirely.

The messenger arrived in Drache traumatized and exhausted. A week had passed since the Great Shadow struck. The Crown's seat had been destroyed, and the Sithire of Southern Arangoth, the Honorable Marcion ul-Fenduth Tagran Aldenbar, had been taken hostage. He spoke of a great, dark menace falling upon the city, decimating the hastily mounted resistance, and claiming the seat of power for itself. The casualties had been surprisingly few, but the message was clear: Ruthmarna belonged to the Great Shadow.
Top
Post Reply
1 post • Page 1 of 1

Return to “Outside Drache”