Bahr is the smallest sovereign land of the Southland Peninsula, bordered on the west and north by Teldanar and east and south by both Southern and Eastern seas. It's population mainly consists of the infamous green-skinned races, commonly known as 'goblinoids' - which includes Goblins, Hobgoblins and Gnolls. Bahr can usually be divided in three separate areas: The capital of Bahrkul, The Outland and The Underworld.

In the last half-century, Bahrkul has become a premiere stopping point for merchant middlemen trading in Nipangui goods, boosting its economic power and the quality of its weapons. No other nation openly trades with the likes of Bahr, but smugglers and other merchants of ill reputation still gain a fortune off Bahr's 'natural treasures'.

Despite its size, if compared to other kingdoms across the continent, Bahr's influence is wider than it is given credit for. Many smugglers, highway burglars and criminal organizations acting across the continent are supported by Bahrkul, sending profits and information to the city in exchange for weapons and manpower. It is said the Dark Elves have their own network of spies and criminals beyond the border, but they manage to act more subtly then their Goblinoid allies.

Little is known about Bahr's actual history. There are no written records of its creation, but tales passed from generation to generation recall the story of the great wars, when the land was scattered with goblinoid tribes seeking supremacy over the other. The bloodshed was constant, giving little space for the land's development. Everything changed with the coming of Bahrkul, the One, son of the God of War Ah'rlak and a mortal hobgoblin. Bahrkul proved to be special since his birth, showing strength and skill above all his peers. A natural charisma made him leader of his tribe, and his cunning in battle gave him more victories then any other warrior before him.

Bahrkul was responsible for the slaying of thousands. Entire tribes were vanquished or enslaved by his armies. The power-hungry leader used of unorthodox strategies, including the use of human mercenaries from nations such as Aslar, Teldanar and the future Elluria, brought by the promise of great fortune. Still, the perhaps boldest move was Bahrkul's alliance with The Underworld. Before him, the people of the dark were considered 'evil spirits', avoided by the goblinoid races, but Bahrkul saw potential past the myths. He found a way into the Underworld, and for months he traveled through a maze of tunnels, with a small party of his best men, facing exotic creatures and challenges, until reaching his final destination: The Dark Elf city of Velvarianin. There, the leader met with one of the city's Matron Mothers.

'The Dark Pact', as it is commonly called, refers to the deal made with the Matron Mother. A powerful curse was cast by the dark city's priestesses upon the land of Bahr; black clouds covered the sky, casting the land in shadows for the next thousand years. This granted the Dark Elves safe passage to the surface, and Bahr saw his opponents slowly wither without their crops and livestock. Victory was complete.

As the war ended, Bahrkul raised a great fortress to house his subjects, and that fortress would later become Bahr's only city, named after its founder. The population consisted of goblinoids, the human mercenaries that allied themselves to Bahrkul, and of course, the Dark Elves. The city sustained itself without the sun, thanks to food products exported from the Underworld--such as roots and insects--the wildlife from The Outland, and another smaller shares imported from other nations. Riches were made in return both from the cheap but reliable weapons made by the goblinoids and the Underworld's exotic goods.

Bahrkul himself lived over 200 years before passing his throne to his closest general, titled 'Tyrant' - a tradition still followed to this day. With his death, the leader ascended from General to a full God.

Needless to say, Bahr's relationship with other nations is one of conflict more then friendship. Recently the orc-hating Alesian Imperium gained a foothold on the Southland Peninsula in their new province of Elluria. A hostility has naturally risen up between the Alesians and the Bahrians. 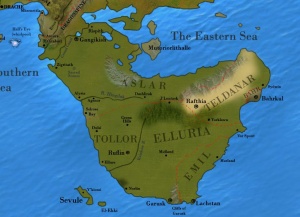 Bahr is located on the Southland Peninsula

The Outland comprises the wilderness outside Bahrkul. Quoting the words of a Teldanari explorer, Bahr's fields are the purest vision of decay in the continent. The land is dry and lifeless, too poor for agriculture, while the sky is forever shrouded by dark clouds, making the sun virtually unknown to Bahrians. Only few other creatures have managed to survive the harsh environment, such as Trolls and Wyverns, feeding off of any travelers that dare to cross the border or leave the 'safety' of the city. In contrast with Bahrkul, the only rule in the Outlands is the rule of the fittest.

The Underworld, a mystery to most Bahrians, is a complex system of tunnels that exist below Bahr and a portion of Teldanar, linking small cities and havens for miles underground. This is the kingdom of the Dark Elves, and other exotic but hostile races of great powers of magic and mind. Still, facts are hard to separate from myths when it comes to the Underworld. Some say Bahrkul is actually ruled by these races, with the Hobgoblins existing only as mere puppets to their schemes. Others say the The Dark Pact, sealed in the time of Bahrkul, exists between the two worlds to this day.

As expected, the Hobgoblin elite rule their city with an iron fist, having a strict set of codes used to control every aspect of its citizens' lives. By law, no race can live outside its respective district. Magic is forbidden and its use is punishable by death, except for the holy magic of priests from regulated government churches. The undead and extra-planar creatures, such as Demons and Vampires, are equally unwanted, and they are openly hunted by the Bahrkulian City Guard. Slavery, on the other hand, is legal, and the taxes in Bahrkul are higher then any other city in the continent, resulting in a major part of the population living in complete poverty to support the shallow needs of government workers.

Although Bahr hasn't involved itself into an open war in over two centuries, Bahrkul's military is strong and well organized, and where they lack in size as compared to other foreign armies, they make up in ingenuity. The goblinoid nation is well known for it's successful and effective use of trained beasts in the battlefield, dating back to Bahrkul. Particularly favored are the Akrags, giant worms native from the Underworld, capable of digging through the earth with astounding speed. The tunnels created by them are used as passage by Bahr's armies, enabling them to cross the field unnoticed and literally strike under the enemy's feet. Insect swarms and diseased vermin are other good examples of 'weapons' employed by Bahr. In contrast with the clans of Zul Kiras, Bahr cares little about honor either in their lives or in the battlefield. Victory is the only goal, and the end always justifies the means.

Although a few other foreign and tribal religions are still accepted, they are only allowed if no God comes before Bahrkul. Otherwise, any heathen religion is branded an 'illegal cult' and persecuted by the authorities. The only exception comes to the Dark Elf deities.

Bahr's gem is the port-city of Bahrkul. It's citizens are a mix of Goblins (70%), Humans (25%), and Gray Dwarves (4%). Other minorities include races from The Underworld, such as the Dark Elves (1%). Other Elves and Mountain Dwarves are a rare sight and don't tend to last long among the other hostile races. Bahrkul has four districts, each segregated by race. The largest district houses the ruling 'higher' goblinoid race: the Hobgoblins. The second largest is divided between Goblins, Gnolls, and a minority of Orcs. The third belongs to Humans that have become a growing power since the city's foundation. The fourth and smallest holds the 'gray dwarves', known as the Daehur in the goblinoid language, and other Underworld denizens.

Several languages are spoken within the small country of Bahr, primarily those spoken by the Goblinoid races, along with smatterings of Dark Elf and other foreign influence.